Drones are such a high demand in the market. If you are considering getting one, the speed at which they can achieve can help prevent disasters.

So, how fast can a drone go?

In short, the commonly bought quadcopters can achieve around 45 mph. Some top models can reach around 70 mph. A racing drone, however, will often be clocked at over 100 mph, with the world record being set at 179 mph. A military predator drone closes in on a target at a surprisingly slow 135 mph.

A typical beginner drone, designed for children will be flying around at 12mph.

As you can see, there’s quite a difference in the specified speeds of drones, but controlling them at speed is quite an art.

How Fast Does the Average Drone Fly?

The average speed of a drone is around 45 miles per hour but the legal limit according to the FAA is around 100 miles per hour. However, similar to your car you do not fly drones at full speed.

With a drone, there is always a theoretical top speed, usually associated with getting the drone to a specific location, but the normal speed of the drone is its operational speed.

Flight speed also depends on three major factors, design, physics of flight and the legal aspects when it comes to how drones fly.

The idea for more speed is simple, if you can find a way to increase horizontal thrust without reducing the minimum upward thrust to stay in the sky, you’ll go faster.

The Most Popular And Common Drone Speeds On the Market:

I went searching the internet for a lot of the commonly purchased drones for home or semi professional use.

Here’s the table of drone speeds that I managed to put together.

Of course there is a difference between a beginners drone and professional drones when it comes to speed.

As you can see from the table, the beginner kids drones can get up to top speed of 12-15mph whereas the professional drone can hit a speed of 70mph.

There is one more category of drones called racing drones or FPV drones, but they are customized, and they can reach an average speed from 60mph-120mph.

How Fast Do Racing Drones Go?

So, racing drones are about 25 mph faster than the top speed of a good quadcopter drone.

Here are the 5 Best FPV Drones

What Are the Common Aspects Influencing Drone Speed?

The beginner drones are much cheaper, but they don’t have nice cameras.

They are purely designed for someone who wants to practice with a drone, and are most commonly purchased for young adults, who might be a little too optimistic about their controlling ability of a 50 mph drone.

They have a relatively slow speed, most commonly in the 12-15 mph range but yes, they are still good with speed and maneuverability.

If you want to buy a drone for a child or teenager, a drone like SYMA which has a speed of 12mph which is good enough for any beginner.

Drones like the DJI Mavic2Pro and Autel Evo have speeds in the range of 45 to 70mph. These are consumer drones, designed more for adults, or those with some experience.

These are the most commonly seen drones on TV and in magazines. Often called quadcopters, they have 4 blades that provide stability and speed.

For speed the best bet is to get a racing drone because they can go up to 120 mph.

Keep in mind these drones are customized, especially the military drones. They are meant for competition purposes. These drones come with flight control software.

These types of drones are stripped down to as light a weight as possible, so don’t have cameras.

There are quite a few sporting events now that feature these types of drones. It’s quite impressive to watch the fling skill of these pilots at the speeds that can be achieved.

Another major factor behind the speed of the drones is their design and technology. There are two kinds of consumer drones design.

A fixed wing drone is very different from a quadcopter, and it resembles an airplane or a glider.

They can not launch vertically off the ground but instead need a runway to launch and land.

Fixed Wing drones have the advantage of using less power to fly faster. Many people are not aware of these kinds of drones but here are some of the best available in the market.

Many people fly these types of drones, but the disadvantage is they have to be kept moving. Unlike a quadcopter which can hover, the airflow under the wing of the fixed drone is what causes the lift.

Rotary wing drones are very popular and utilized as they have propellers which rotate and swing .

The quadcopters and hexacopters fall in this category. The prime examples will be DJI Mavic as a quadcopter and Yuneec Typhoon H pro as a hexacopter.

The propellers help them to keep the drone up in the air against gravity. These are the most commonly used drones for photography, videography, and events.

Over the years these have become quite sophisticated, and most probably your favorite sporting events are filmed using these types of drones.

Like with most devices, the weight of a drone determines how fast it can go. Weight also works hand in hand with gravity.

The heavier the drone is, the more it will have to fight against gravity, which will slow it down.

As the drone has to go up and gravity tends to pull things down, at least here on Earth, so the propellers help the drone to achieve altitude and fly horizontally.

A lightweight drone like a racing drone has the power to weight ratio to easily overcome the gravity force.

With a quadcopter, the propellers spin on the horizontal plane which helps in fighting gravity to prevent descent, If you want your drone to go faster, it can go completely sideways by tilting the rotary blades providing lateral thrust.

The balance of upward thrust needs to match the gravitational pull of the Earth to maintain a consistent altitude.

That’s why prosumer drones are heavy due to larger batteries and enormous payloads, and they don’t fly that fast.

On the other hand, racing drones are designed for speed, which explains their miniature and lightweight design.

Types of Motor and Propellers:

The motors and propellers used on a drone will determine its top speed. There are two types of motors, brushless and brushed motors.

Brushless motors are very power efficient and can achieve high RPMs without consuming a lot of battery power. That’s why they are used in high-performing drones.

On the other hand, brushed motors need lots of power to produce the same lift as brushless motors. So, they’ll need large batteries, which will weigh down the drone.

They are also not very efficient. The larger the pitch a propeller can produce, the more thrust it will produce when
it comes to propellers.

However, the high pitch also leads to a drag that will need a powerful motor. Drone manufacturers find a good balance between the propeller’s pitch and motor size to achieve top speeds.

Some drones come with several operating modes. The most common include a slower beginner mode and a sport mode which allows you to achieve the highest speed the drone can manage. All you need to do is switch between the two modes when you need to.

If you really want to achieve top speeds, you have to check the weather in your region. When it’s too cold, batteries will not function as expected.

Make sure you check the drone’s manual for the ideal temperatures for using your battery. Furthermore, when it’s too windy, and you’re flying against it, the motors will have to work much too just to move forward, leading to lower speeds.

According to FAA rules you cannot fly your drone more than 100 miles per hour in the continental US.

You also need a license to fly your drone. If you are flying for fun, there are not many restrictions but if you are flying your drone for business, then you need to pass a FAA test and receive Part 107 certification.

Go ahead and check the FAA B4UFLY app to know more.

What Is the Fastest Drone Speed Available?

According to the Guinness World Records, the fastest recorded drone speed is 179mph.

The test was done outside New York City. The drone used is called DRL RacerX from the Drone Racing League(DRL).

It weighed 800 grams and produced 46000 RPM and won the category of “fastest ground speed by any quadcopter”. Here you can see that weight is really a major factor when it comes to flying drones faster.

Ideally, the lower the weight, and the better the power, the faster the drone will travel.

How Can You Make Your Drone Go Faster?

There are ways to make your drone go faster, but it depends on mode, altitude, flight conditions and weight.

For example, you can change the mode by choosing the sport mode on DJI Mavic Pro to make it go faster.

Drones also fly fast in high altitude and flying in the direction of wind boost its speed. You can always customize your drone with better propellers and motor to make it go faster. Let’s say more power, more speed.

Weight is the biggest factor, though. A light drone with power will travel very quickly.

According to the Guinness World Record, the Racer X drone from Drone Racing League holds the world record for the fastest speed ever which hit 179mph.

Other ways you can increase a drone’s speed include –

Drones speed varies depending on the drones you are flying. Beginner drones top out at around 12 to 15 mph and a good racing drone will reach a rather stupefying 130mph.

The common drone top speed of 45 to 50 mph is more than adequate for most people with the most common uses.

To make your drones faster you can always customize your drones with better propellers and motors. This can often be done by modifying a shop bought drone with aftermarket kits.

The question essentially becomes, what do you actually want your drone for. If it’s mainly camerawork, is making it faster going to be worth the trouble.

The speed between 30-50 miles per hour according to me is a good enough speed for a drone for most people. Most drone users purchase a drone with a speed that matches their requirements.

If you want to use your drone for aerial photography, video shooting, the speed of 20-40 miles per hour is good enough but if you want to really fly fast, go for racing drones

How Far Does the Average Drone Fly?

What Is the Fastest Drone Speed Available?

According to the Guinness World Records, the fastest recorded drone speed is 179mph by Raver X drone in Drone Racing League. 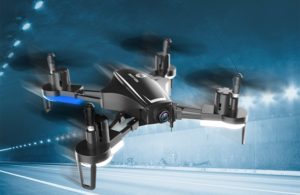 Article Name
How Fast Can A Drone Fly? (With Examples)
Description
Drones differ in speed depends on what categories they belong to. From Beginners to Consumer to Racing Drones speed varies a lot. In this blog we talk about different type of drones and their speed.
Author
Nick Cast
Publisher Name
Remoteflyer Private Limited
Publisher Logo

2 thoughts on “How Fast Can a Drone Fly?”