Drones have really changed how we do business. Gone are the days when we had to rely on expensive helicopters for small tasks.

Drones are now applicable in a wide range of sectors including agriculture, deliver, construction, and filming. If you’re in any of these industries, or are just curious about the weight drones can carry, this article has got you covered.

So, how much weight can a drone carry?

Please keep reading to learn more about drones and their payload capabilities.

Factors To Consider That Affect Weight a Drone Can Carry:

Below are the main factors that affect how much weight, also known as the payload, a drone can carry.

This is definitely the most important factor since it’s the drone’s source of power. Drones advertise the battery’s capacity and voltage because they determine how reliable the battery is and how long it can last.

Another factor to consider is the discharge rate. This is the amount of power that ca be drone from the battery at a time.

Batteries power the motor, enabling it to power the propellers. The more powerful the motor is, the bigger the thrust it can generate.

Generally, a drone has to generate thrust that’s more than the drone’s weight for it to take off. When you add the weight of a payload, the motors will have to rotate at higher speeds to compensate for this extra weight.

Propellers and motors work together to generate the drone’s lift. The more propellers a drone has, or the larger the propellers, the more air they can displace to allow the drones to take off.

One of the reasons why Yuneec drones often have 6 or 8 propellers, which allows them to carry considerably larger payloads.

As mentioned earlier, the propellers and motors need to generate enough thrust to cancel the drone’s weight and the weight of the payload.

Another factor to consider is the drone’s build, which should be strong enough to handle extra weight.

Drone Types and the Weight They Can Carry:

There are many types of drones depending on the tasks they’re built for. Below are the main types, and the amount of payload you can expect them to handle.

As the name suggests, these drones aren’t designed to do much. Their flight times range from 5 to 15 minutes, they have standard or below standard cameras, and they are quite small or light.

The best you can do with such drones is carry loads weighing around 50 grams or fewer. It’s no surprise that some of them, such as the Cheerson tiny drones, can barely lift 10 grams of payload.

Hobby drones are mostly designed for hobbyist pilots of photographers. As such, they can have longer flight times, maybe up to 30 minutes, decent cameras, and other useful features.

To fulfill these features, the batteries and cameras take most of the drone’s capacity. But you could still lift small stuff just for fun.

A good example is the DJI Mini 2 which weighs roughly 250 grams, and can carry a load of up to 190 grams.

These are drones that have features of both consumer drones and professional drones. The DJI Mavic Pro series drones are prosumer drones which can carry between loads weigh up to 2.2 pounds.

The Yuneec H920 is another example which can lift to 3.5 pounds.

These are drones built for use in a wide range of industries such as agriculture, construction, military, law enforcement, and industrial inspection. As a result, they can carry considerably larger loads, extended flight times, and many other advanced features.

As mentioned earlier, these drones can carry weights ranging from 20 kg to 220 kg. Below are some examples and their payload capacity;

How to Make a Drone Lift Heavier Payloads?

If you are into building drones and customizing them, below are some of the ways you can make the drone lift heavier loads.

What Does the Future Holds for Drone’s Payload Capacity?

As drones find more applications in various industries, we can expect to see drones being able to carry heavier loads, and within a sustainable price range.

Drone delivery is the next big thing in the drone world. And drones will need to carry heavy packages if they are to replace traditional delivery methods.

We’ve already seen drone delivery in rural Africa and other parts of the world by Zipline, where they delivered medical supplies.

Drones were also highly used worldwide to deliver food and medical supplies during the pandemic. Currently, the regulations are quite restrictive, but we can expect all this to change thanks to Remote ID which allows drone identification, and which has initiated advancements in extending a drone’s operating range.

A lot is happening in the drone industry, and we can expect them to play a bigger role in our lives in the next decade.

And there you have it. Currently, consumer drones and toy drones can’t really carry heavy loads. If you need a drone with a larger payload capacity, you’ll be better off with the commercial drones, but they are costly.

Unless you really have to, it’s not advisable to make the drone carry heavy loads. But with the changes taking place in the industry, we can expect to see them being able to carry heavier loads. 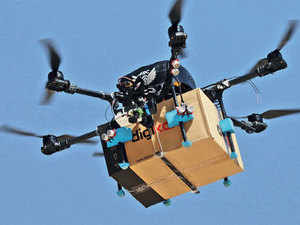