What comes to mind when you see a drone with a camera, you imagine a clear aerial view of a breath-taking landscape, historic site, or even a movie scene?

The fascination of man seeing objects with a bird’s-eye view kicks in. For a long time, such shots were expensive to take, but it’s now more accessible thanks to drone cameras.

Drone cameras are just regular cameras, only smaller, that are designed to work on a drone. Most of the work drones carry out include taking photographs, recording videos, and carrying various payloads necessary to the work at hand. All you need to do is select a camera drone that suits your needs.

Please keep reading to find out how drone cameras work, the various types, the functions of drone cameras in multiple industries, and some top camera drones in the market.

What is a drone camera?

Generally, this is a camera designed to work on a drone. Drones have longed evolved from just flying toys to carrying sophisticated payloads for various tasks, including cameras. The camera can be detachable or inbuilt based on the types of drones you’re using.

How Does a Drone Camera Work?

A drone camera is designed to communicate with the controller on the ground. That way, the pilot doesn’t have to land the drone every time they need to adjust the camera settings.

To understand how both the drone and the camera work, we need to understand some basics about drones. To fly a drone, you use a controller.

So, to effectively use a drone camera, you have to have some drone flying skills and some photography skills.

How Does Video Transmission From the Drone to Controller Work?

Besides taking photographs, you can also view live footage of what your drone sees using FPV goggles, VR goggles, a smartphone, or a screen inbuilt into the controller.

The transmission is still made possible by Wi-Fi, radio frequencies, or Bluetooth. And you can use the smartphone or controller to control various camera settings for better footage.

What Are the Types of Cameras Used In Drones?

Drone cameras have come a long way. Today’s cameras are advanced and specifically equipped to take high-quality shots from some distance above the ground.

Whether you need a simple drone camera for photography or a more sophisticated one for specific tasks, there’s one in the market for you.

They also come with gimbals which help stabilize the footage even when there’s turbulence as the drone maneuvers in the air.

A good example is cameras used in top drones such as DJI, Yuneec, and Autel. Most can shoot footage 4K in resolution (With Autel robotics drones achieving up to 8K resolution).

Another fascinating feature about these cameras is the ability to zoom. This allows them to take shots from high altitudes without distorting the quality of the images.

DJI has a series of Zenmuse zooming cameras, with the latest managing a zoom of up to 180X. Such zooming power is helpful when the drone user needs to take shots of construction projects, electric stations, or turbines from a distance.

What Are the Uses of a drone camera?

With the combination of a drone and a camera, drone users can now accomplish both hobbyist and professional tasks. Below are some applications where drone cameras are applicable.

This is one sector that has heavily utilized drone cameras. Shots that relied on helicopters, cranes, and other sophisticated filming equipment are now being accomplished using drones.

Some top films that used drones when filming include James Bond’s Skyfall, The Wolf of Wall Street, Jurassic World, and The Expendables 3.

Besides filming moves, drones are also useful in journalism filming, especially in snowy areas, caves, or other areas where it’s inaccessible by foot or by vehicles.

And lastly, photography. See those excellent aerial selfies, photos of real estate, or just a photo of nature such as the Amazon forest, can now be accomplished using drones.

Drones with Follow-me features, tracking features, and autonomous modes make it easier to make cinematic shots with just the click of a button.

Role of Drones In Film-Making: The Complete Guide

From food delivery to parcels and other items, drones are now being used to deliver packages worldwide. Amazon Prime is Amazon’s delivery service which has been in the works for some time and has rolled out deliveries in England and some parts of the USA.

Drone delivery has also been very prevalent during the Coronavirus pandemic. UAVs have been used to transport vaccines, get lab samples, and even deliver food as a solution to minimizing contact in an attempt to stop the spread of the virus.

So, how does a camera help in such a situation? Drones utilize a wide range of sensors, a camera being one of them, to identify where to land and be aware of its surroundings at all times.

Drones are also useful in disaster management, especially in areas where vehicles or people on foot can’t access.

Equipped with unique thermal cameras and sensors, you can use drones to track wildfires, gather data, and help firefighters make the best decision on how to tackle the fire based on real-time data.

It’s expensive and quite challenging to do this using a helicopter or other traditional data acquisition systems.

Drone cameras are being deployed in sensitive archaeological sites where people can’t access. This opens up more possibilities in finding artifacts they couldn’t find before.

A good example is National Geographic’s expedition to discover what happened to two mountaineers, Andrew Irvine and George Mallory, who disappeared on Mount Everest in the 1920s.

They used drones to film most of the area with an aerial view. Drones are also being fitted in rockets to assist in collecting data on other planets.

A good example is NASA’s Ingenuity drone used to collect data about life’s existence on Mars and relay it to Earth for further study. More drones for this purpose are also in development.

Drone cameras are helpful, especially by law enforcement, in surveillance, monitoring crowds, and even identifying threats.

This kind of surveillance is also vital in monitoring borders to prevent any criminal activities and alert authorities.

Military personnel also utilize drones to detect bombs, gather intelligence in enemy lines, and even launch attacks. This is possible because the drone pilot has a visual live feed of the area they are targeting.

Besides law enforcement, drones are also useful in surveilling and monitoring pipelines, constructions, power lines, solar panels, and a wide range of facilities for maintenance, repairs, and overall performance.

Another area where drone cameras help in monitoring is wildlife monitoring. Understanding how animals survive in their natural habitat is fascinating, but it’s almost impossible to do it when in their habitat.

And things like airplanes can be too distracting. But drones can get close without altering their environment. Drones are also useful in tracking the population and even tackling poaching, thanks to drone cameras.

With advanced cameras and sensors, drones are now useful in collecting weather data such as humidity, wind speed, and temperature, which then helps in weather forecasting.

Drone cameras can be used to collect several shots over a large piece of land. These shots can then be used to create orthomosaics, 3D models of the terrain, or create topographic maps.

This makes it easier for land surveyors, geologists, and other map users to get up-to-date data on various landscapes with minimal cost and less risk.

Here Are the Five Best Drones with Cameras:

Below is a simple comparison of some of the best drones with cameras you can find today.

From delivery, disaster management, filmmaking to personal photography, there’s a lot you can do with a drone that has a camera. Better yet, you don’t have to spend hundreds or thousands of dollars on this functionality.

Even drones that cost less than $100 can work with a decent camera. 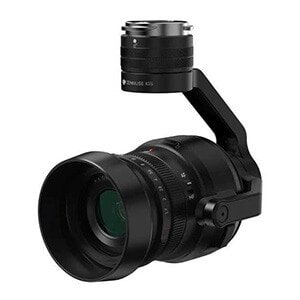 Article Name
What Is a Drone Camera and, How It Works?
Description
A drone with a camera has a major role to play, and they have been used in many important fields.
Author
Nick Cast
Publisher Name
Remoteflyer Private Limited.
Publisher Logo