Programming is a fantastic skill but is no fun when you’re first starting. Whether you’re a student or a veteran, introducing fun to coding reduces the struggle. And there is no better way to make coding exciting than drone programming.

What is more amusing than spending an afternoon backflipping a drone? I know it sounds great, but doing it is even more exciting. Then, which programming languages do you need to code for drones?

In brief, you need C/C++, Python or Java to fully program your drone from scratch to flying.

This article gives you all the details you need on drone programming. From building a drone from scratch to the programming language needed to code for drones. Stick around and have that drone fulfill your wish.

Why Drone Programming Is Important?

There are many reasons why drone programming is an important skill. First, drones offer a very involving yet exciting way to learn to code. Thus it’s an appealingly fast way to learn Python, C++, and other programming languages.

Secondly, drones share technologies with other autonomous vehicles and robots, making drone programming a valuable skill. With the bright future of these industries, expect to be a much sort-after programmer.

Finally, drone programming is a fantastic hobby. Drones have endless applications in today’s life, from delivering a beer to your thirsty friends to military missions.

Indeed, having a drone follow your friend’s home or perform aerobatics sounds impressive to me.

What Do You Need To Know About Programming Drones?

Are all drones programmable? Definitely no. Consumer drones come ready for use, with no allowance to reprogram or add programmable components.

But there are programmable drones mainly designed for use by learners and hobbyists. If you find them less exciting, there are DIY drone kits to assemble a drone from scratch. With these kits, you get to customize a drone to your taste.

How hard is it to assemble one? For sure, as many advanced robots, drones are hard to build from scratch. Several levels of programming (more on this in a few) need to be done.

Hey! Don’t throw away that drone programming project yet. Because the robot operating system (ROS) got you covered. Once you assemble your drone, install ROS.

You then only need any of the many compatible programming languages to custom program the drone.

Which programming language do we need to code for drones?

A drone has two layers of programming, hardware, and software programming.

This is low-level programming to build the basic functionalities of your drone. It involves making the firmware that links the processor with the sensors and actuators.

The drone’s firmware defines how the motors, battery, propellers, and other hardware aspects relate.

For example, most drone applications require steady and level flights. To achieve the required flight, the processor sends varying amounts of power to different motors.

The firmware determines the exact power needed based on information from the drone’s inertia measurement unit.

For programmable drones, the most preferred firmware programming languages are C, C++, and Assembly. While the learning curve for these languages is steep, the fun starts once you get the basics.

What’s more, you can practice firmware programming using simulators before getting on a real drone.

The DIY/modular drones are different. The hardware kit determines the language you need to code the firmware.

The most popular modular drone kits being Arduino and Raspberry Pi. For instance, an Arduino modular requires Arduino, which is not a language but a set of C/C++ codes called through Arduino sketch.

Modern drones have made firmware programming easier. The firmware code exists within the ROS for easier drone control.

To add more code to the ROS, you only need to create specific node programs in a programming language compatible with ROS.

A drone is a complete unit that accepts commands to perform different tasks. For example, your drone needs instructions to control speed, flight altitude, or flight paths. Firmware interprets these commands and serves the intended function.

Software programming deals with creating commands for different drone applications. It mainly involves the use of high-level programming languages such as Python and Java. The language to use depends on the drone’s application programming interface (API).

For instance, if the drone has a Java-based API, you use Java to code through an interface. There are other APIs based on other languages, such as C/C++. However, drones running on ROS can accept commands from multiple programming languages.

Basically, you need to learn C, C++, and Python or Java to fully program your drone from scratch to flying.

What Do You Need For a Drone Project?

A drone project requires the following:

As indicated above, drone programming offers a fun way to learn and improve on your coding. An ideal programmable drone should have many programmable features for your experimenting. With the drone industry expanding fast, there are numerous choices at your disposal.

The most basic programmable drones let you change the essential functions like the flight patterns. Such drones lack advanced features like GPS and cameras.

For better room to exercise your coding, opt for programmable drones with gyros, barometers, and other sensor modules inbuilt.

A drone with advanced features may be challenging to program. Still, the added features offer several ways to solve a problem.

Most of these drones allow for third-party programming tools and languages. Further, there are several open-source and proprietary drone development tools available to make your coding more accessible.

This foldable quadcopter drone offers you the best there is in programmable drones. It features a full HD camera for incredible footage, with several customizable professional settings.

Parrot ANAFI drone is lightweight and have a fast-charging battery that gives you 25 minutes of flight time.

This drone has an impressive speed of 35mph. The Geofence, SmartRTH, and Find My Drone functions ensure your drone’s safety while on a flight. Also, the regular software updates enhance this drone’s performance while allowing you to customize more features.

Parrot ANAFI drone has inbuilt APIs and SDKs that offer you a versatile platform for coding.

The platform supports popular text-based languages such as Python and JavaScript and block-based programming languages like Blockly. The icing on the cake, Parrot Education, is there to help you when you get stuck.

The many features of this drone come at a hefty price. Also, you have to use your smartphone as a flight controller because the drone lacks one.

Tello Quadcopter drone is the best entry-level option for drone programming beginners. The drone features visibly separated modules with very straightforward relations. You can simply disassemble and assemble it quickly.

This drone’s main features include a flight time of up to 15 minutes, a flight range of slightly above 100 meters, a 720p HD resolution camera, and a fast-charging battery. It offers an excellent indoor and outdoor use experience.

The major downside of this drone is the difficult usability in low light conditions.

You doubt a drone can flip and turn mid-air. The Sky Viper e1700 flipping ability will surprise you. The drone is lightweight to allow for quick maneuvers while maintaining stability.

Even though the Sky Viper e1700 lacks an inbuilt camera, you have complete access to its firmware. Additionally, the Builder app shows you clearly the workings of all the available features. For a capable developer, adding modules and programming them in this drone is easy.

The Viper’s controller is easy to access and gives you enough playground to turn this simple drone into a powerhouse. You can program the ViperFlight 5 control firmware to fly and twist as you wish.

The drone has a short flight time of 8 minutes.

If you are up for a more challenging adventure, go for DIY drone kits. These kits contain all the components you need to build a working drone from scratch. Factors to consider when shopping for a DIY drone kit include:

The complete assembled DJI Mavic Fly drone weighs only 250 grams and has a flight time of 30 minutes on a single full charge. The included camera shoots quality videos and photos, making this kit a great companion for creatives.

The drone allows for programming and operation on iOS V10 and on Android V6.0 upwards. This drone offers excellent versatility for learners and veterans alike, though at a hefty price.

If you want an affordable drone kit, the DJI Tello Quadcopter Drone Boost Combo kit makes a perfect choice. DJI Tello has a straightforward design and is easy to assemble.

For a very reasonable price, you get:

Even though this drone has a shallow range, its top speed is incredible. It is easy to fly, and the maintenance accessories included make cleaning is effortless. You access the controls through the DJI FlyApp, then code easily using Scratch.

With your preferred programmable drone ready, it’s time to do the actual job. The idea is to build mobile apps using an SDK/API, which will send the commands to your drone.

Many programmable drones have an SDK/API packages; if absent, get an SDK/APK supported by your drone.

There are many SDK/API options available for drone apps building. The most popular options are:

This is an open-source and free SDK/API produced by 3D Robotics. It is a favorite for developing Android control apps and supports major drone platforms.

With DroneKit SDK/API, you can program autonomous flight features, live telemetry, and create intelligent flight paths for your drone. You can get project ideas from GitHub.

This is another popular SDK/API from FlytBase. The platform is not open-source, and you need to register before use.

Drone programming serves as a fun way to learn or teach coding. The skill itself is precious, both as an exciting hobby and career-wise. This article sheds light on everything you need to know about drone programming.

Programmable drones or DIY drone kits are pricey investments. But that should not stop you since you can learn using drone simulators. And they are mostly free, with great repositories for coding ideas.

With a programmable drone and a supported SDK/API, you are good to start creating remarkable drone control apps right away.

What Are Autonomous Drones, and How Do They Work? 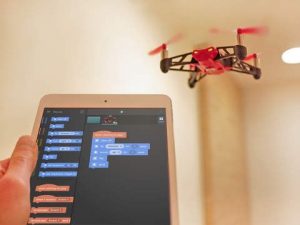 4 thoughts on “Which Programming Language Do We Need to Code for Drones?”