With the latest advancement in drone technology, development of stealth aircraft or stealth drones, and advanced sensors, one would assume that non-stealth drones would become obsolete.

But that is not the case. As a matter of fact, I think they will be around for more decades to come.

Are you interested in learning more? Please keep reading to find out why non-stealth drones are here to stay and how they compare to stealth drones.

You may already know the difference between the two, but let’s briefly review them.

Stealth drones/aircraft are drones designed to fly undetected by radar systems. The military uses them to carry out reconnaissance missions in enemy lines.

To fly undetected, they mask or reduce their emissions such as radio frequencies, infrared, sound, light, and any other aspect that may expose them to detection systems.

This technology is collectively known as Stealth Technology.

To fully execute it, the military also utilizes high-level planning to cover all maneuvers that may risk the aircraft being exposed.

The Lockheed Martin RQ-170 Sentinel is an excellent example of a stealth drone.

On the other hand, non-stealth drones are drones that detection systems can detect. They range from the regular quadcopters we use to sophisticated military drones such as the US Military’s Triton, Global Hawk, and Predator drones. The Predator has been in use since the 1990s, and it was very instrumental in the Afghan war.

Why the Non-stealth Drones Are Here To Stay

Below are some reasons;

They Are Still Useful:

While stealth technology presents more possibilities, it doesn’t make sense to replace them entirely. For starters, with advanced cameras and sensors, it’s possible to conduct surveillance from thousands of miles away.

That means that it’s possible to conduct surveillance on a group of people and still be out of range of their detection systems. For instance, the Global Hawk can survey 40,000 square miles (100,000 square kilometers). That’s almost the size of the entire Republic of Iceland or South Korea.

In such a case, it can gather data from a safe distance, and a stealth drone will not be necessary since you may not have to enter the enemy’s airspace.

Besides gathering data, they have also been linked with advanced computer processing and AI, which analyzes the data in real-time and gives the decision-makers accurate information to rely on when making decisions.

So,instead of replacing them, the military is embarking on upgrading them and maintaining them. The Global Hawk, for instance, is in a development and maintenance program that runs until 2040.

In 2014, the United States Navy attempted to build a drone that could fly from the US aircraft carrier. This is because Aircraft carriers face threats from advanced missile technology advancements made by countries like China.

There was a debate on whether the drone should use stealth technology or not. They chose the non-stealth option, and one of the reasons they cited is that developing a stealth drone could cost up to 3 times more than non-stealth drones.

The project didn’t go through, though. They later converted the program to develop a Carrier-Based Refueling System known as the Boeing MQ-25 Stingray.

This shows that non-stealth drones are cheaper to produce, and considering most of the work is automated, they also don’t need a large workforce to run them.

In an article published on The Foreign Policy, Paul Sharre and Sham Brimley stated that the real reason the Navy may have gone with the non-stealthy option is that some thought stealthy drones compete with manned stealth aircraft.

A stealth drone that can deliver missiles and operate from an aircraft carrier means fewer pilots will be deployed.

On the other hand, non-stealth doesn’t replace manned aircraft since they are used in less sophisticated operations. This may be true because Mike Hostage, a US Air Force General, once stated that drones like the Predator are “useless” in a tough air battle where the opponents have the necessary firepower to shoot down a drone.

Most drones are used for surveillance and attack in areas where the opponents lack the power to deal with a drone. 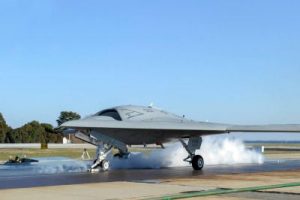