We now have 3 Mini drones from DJI to choose from. They may look similar on the outside, but they have enough differences to make you choose one over the other.

So, which one is the best between a DJI Mini, Mini 2, and a Mini SE?

If you’re a professional photographer looking for a budget drone, the DJI Mavic Mini 2 is still the best budget camera drone. It features a 4K camera, better wind resistance, and better performance. On the other hand, the Mavic Mini SE is the best beginner budget drone, especially for those willing to compromise on the camera and other improvements in the Mini 2. But it doesn’t offer much over the original Mini.

Before you go ahead, there is a quick comparison for you,

Would you please keep reading to learn more about these drones, their similarities, differences, and what they’re best used for?

If you’re new to the DJI Mini drone series, below is a timeline of how they were released.

Released in 2019, this was the first drone in the Mavic Mini series. It instantly became one of the best miniature drones offering almost the same features as the larger and more advanced DJI drones, a fete they failed in when developing the DJI Spark.

The Mavic Mini 2 came a year later after the Mini, in 2020, and it’s also one of the best things that happened to DJI fans. It came with several significant upgrades that outdo the Mini 1 by far as we’ll see later in the article.

And lastly, we have the recently released DJI Mini SE. It wasn’t really an improvement to the Mini 2, it’s just a slight upgrade to the Mini 1.

Now let’s see how these drones compare based on the main features.

For starters, it comes in a small, foldable design and weighs just 249 grams. This makes it an excellent option for hobbyists who don’t want to register their drones.

The FAA requires all drones weighing 250 grams or more to be registered with them. Even though the process is easy, not having to register is still cool.

It also features a palm-sized design. You can easily fit it in your pocket or a small backpack. However, when going outdoors to fly, remember that the controller also weighs about 250 grams. So, bear in mind that you will be carrying at least 1 pound in your backpack.

Mavic Mini 2 has the same miniature and foldable design as the Mavic Mini. It features a palm-size build and still weighs 249 grams.

As such, you don’t have to register it. Considering the upgraded camera, which I will discuss in a minute, the Mini 2 easily becomes a viable alternative to the Mini.

Unlike the Mavic Mini, the Mini 2 has air intakes that enhance cooling as the drone flies. It also has a status indicator button. Overall, the built quality is better and more durable.

DJI’s Mini SE is quite similar to the other Mini series’ drones. It weighs the same sub-250 grams weight, features a palm-sized design, a foldable design, and can easily fit in your jacket pocket. Like the Mini 2, it also has a better build quality compared to the Mini 1 drone.

How to Register a Drone in the USA and India?

While the Mavic Mini has excellent features, DJI compromised on the camera since it only shoots in 2.7K and captures 12MP still photos. Not that a 2.7K resolution is bad, but similar drones in the Mini’s price range could shoot in 4K.

For most hobby applications, a 2.7K resolution is more than enough – not forgetting that it has 3-axis stabilization for smooth footage even in turbulence. However, the Mini only produces photographs in JPEG format, not in Raw format.

This is one of the areas DJI made improvements. As mentioned earlier, the Mini shoots in 2.7K. On the other hand, the Mini 2 can shoot in 4K at 30fps.

If you’re a professional photographer and passed on the Mini due to the camera, you’ll find the Mini 2 quite suitable. And it doesn’t stop there.

You also get a 4X zoom, which can help spice up your photography sessions. But the zoom isn’t entirely lossless. You can only achieve a lossless zoom at 2X.

After that, the image quality deteriorates. And unlike the Mini, you can get the photographs in Raw and in JPEG.

While it came later than the Mini 2, the Mini SE still shoots in 2.7k, has a 12MP camera, lacks Raw image functionalities, and has a lower bit rate (40 MBPS compared to the Mini 2’s 100 MBPS).

As you can see, it’s built based on the Mini 1 technology, which also includes the 1/2.3-inch CMOS sensor and 3-axis stabilization.

Unlike most beginner drones, the DJI Mini 2 can last up to 26 Minutes in the air, thanks to the powerful batteries and excellent aerodynamics.

This is one of the factors that made the Mavic Mini the best drone for most people at the time before they released the Mini 2. Of course, how long it spends in flight also depends on the weather conditions.

When it’s too windy, it may consume more battery power, especially when you’re flying against the wind. Also, since it’s too light, flying it in very windy conditions isn’t advisable.

When it’s too cold or too hot, the batteries may not function as they should. But in the optimum conditions, and with at least three batteries, you can spend at least an hour outdoors flying your drone.

How about speed? A Mavic Mini 1 can achieve a top speed of 46.8km/h, which is not that bad for such a drone.

There isn’t much of a difference in flight time between a Mini and a Mini 2. They both can achieve up to 30 Minutes. However, the Mini 2 has more powerful and more efficient motors, allowing it to achieve top speeds and still last longer in flight.

Like the Mini 1 and Mini 2, the Mini Se can still achieve at least 26 to 30 minutes of flight time. Its batteries are slightly more efficient than the Mini but still inferior to the Mini 2.

However, 30 minutes of flight time is still a long time to last in flight for a budget drone.

The Mavic Mini achieves a 2.5 Miles operating range, which is pretty standard. Besides, the FAA, and other drone regulatory agencies in other regions, require drone pilots to fly their drones within the line of sight.

Considering its small size, you wouldn’t fly out of the line of sight even if you wanted to since you could easily lose it.

This is another area that DJI really improved on. The Mavic Mini only achieves 2.5 Miles operating range and relies on Wi-Fi signals which aren’t the best.

On the other hand, the mini 2 is equipped with DJI’s OcuSync 2.0, a strong transmission system that increases the operating range up to 6.5 miles.

But as mentioned earlier, always fly within the line of sight unless you have the authorization to fly otherwise.

Surprisingly, the Mini SE doesn’t feature the OcuSync 2.0, despite being the latest version. Instead, it has almost the same transmission as the Mini 1, albeit stronger, and can achieve a range of at least 2.5 Miles.

I was a little disappointed by this, but considering they lowered the price significantly, the 2.5 Mile rage will do.

The Mavic Mini has GPS-enabled stabilization to prevent it from drifting away and a GPS-enabled return-to-home in case of emergencies.

Besides, it lacks Activetrack, a follow-me mode found in most drones, and it’s the only feature that really needs obstacle-avoidance systems.

So if the drone gets lost, you can also use the Find My Drone Feature on the DJI Fly App to find your drone.

Some of the safety features in the Mini SE include;

DJI didn’t improve much on safety features. The DJI Mini 2 has downwards-facing sensors, RTH, and GPS stabilization but lacks omnidirectional obstacle avoidance, which would allow the drone to accomplish various intelligent flight modes without crashing.

What they did improve on was stability since the Mini 2 withstands turbulence better than the Mini.

To enhance the flying experience, the Mavic Mini comes with 3 flight modes, which include;

Photographers can easily choose this drone thanks to the wider variety of flight modes. Besides the flight modes I mentioned earlier, DJI added Boomerang to the Quickshots flight modes and added a flight mode known as Panorama.

They also added Enhanced Photo for editing photographs, QuickTransfer for directly transferring footage to your smartphone, and Trimmed Download that allows you to select a section of a video that you want and download it for editing. You can’t do any of these with the Mavic Mini.

A new Mavic Mini costs $399, which is not that expensive for a beginner drone with advanced features.

Below are more changes that DJI made in the Mini 2;

The Verdict: Mavic Mini vs. Mini 2 vs. Mini SE-

So, which one should you choose? It’s no doubt, Mavic Mini was the best drone at the time of its release. But it was quickly replaced by the Mini 2, which came with upgrades, such as the camera, flight time, battery efficiency, ability to trim and edit photos, and the ability to withstand strong winds.

The Mini SE came later, and it’s just a version of the Mini 1 and not really an upgrade to the Mini 2. I still think that the Mini 2 is still the best beginner drone.

However, if you’re on a budget and don’t mind the 2.7K camera, the Mini SE is a suitable option since it costs $299, about $150 less than the Mini 2. If you already own a Mavic Mini, then you don’t need a Mini SE. Your best option is the Mini 2. 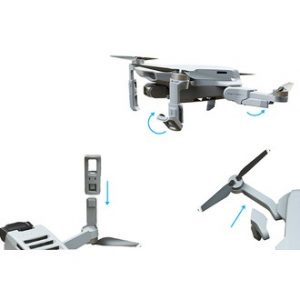 Article Name
DJI Mavic Mini vs DJI Mini 2 vs DJI Mini SE: And My Vote Goes To
Description
In this blog, we compare all the three DJI drones and help our readers to decide which DJI Mini drone to go for.
Author
Nick Cast
Publisher Name
Remoteflyer Private Limited
Publisher Logo