Whether you are a seasoned drone pilot or a beginner, you might be wondering why drones are limited to 400 feet altitude. Well, there are several reasons, let’s take a look at the main one though which is-

Why are drones limited to 400 feet?

The reason Commercial and Recreational Drones are limited to 400 feet because of FAA safety rules and regulations of controlled airspace. According to FAA’s drone regulation rule 107, due to the airspace controllers communicating and separating manned flights from each other in higher altitudes, recreation drones can prove to be hazardous in such controlled air spaces.

But is there a way to legally fly drones above 400 feet?

Well, yes. You can fly a drone above 400 feet but it isn’t that simple. In this article, we’re going to explain to you everything about the drone flight limit and what measures are required to exceed this limit.

We’re also going to suggest a few high-quality recreational drones that you can fly above 400 feet.

So, sit back, relax, and read this article till the end.

How high can you fly a drone?

The maximum height a drone can be flown at depends upon a few possibilities. In the US, the laws and regulations of commercial and recreational UAS flying are under the jurisdiction of the Federal Aviation Administration.

According to Rule 101 of the FAA, the maximum height of drone flight should be restricted to 400 feet in uncontrolled air spaces.

In general, recreational drones are allowed to fly in Class G surface which allows for only 400 feet maximum height.

To fly higher, you need airspace authorization which can be issued by the FAA themselves according to the safety code of AMA.

To increase the time of flight and the height limit, you must create a flying license or waiver which allows you to fly above 400 feet limit, in which case, it will be legal for you to fly your drone above 400 feet but the flight will still be monitored perfectly.

What happens if you fly a drone above 400 feet?

Well, that depends on where you’re flying. There are controlled and uncontrolled air spaces and the risk of collision in both spaces is severely different.

Let’s take a look at each of them.

Flying above 400 feet in Uncontrolled Airspace.

Flying above 400 feet in Controlled Airspace.

Here is the difference-

Flying Above 400 Feet in Uncontrolled Airspace:

Well, if you fly above 400 feet in uncontrolled airspace, it is likely that nothing will happen.

Although the airspace regulations and rules suggest you to stay below 400 feet due too little to no air traffic, you won’t face any legal issues by flying over the height limit.

The reason you shouldn’t choose to fly above 400 feet in uncontrolled airspace though, is that you might on a very rare occasion end up causing a collision with a manned aircraft which can be disastrous and would lead to incredibly huge repercussions.

Flying Above 400 Feet in Controlled Airspace:

If you’re not authorized to fly in controlled airspace and you end up exceeding the flight limit, you’re going to be tracked by the FAA because of rule-breaking in a controlled environment where the risk of collision is higher than another uncontrolled airspace.

Thanks to drone trackers and other security mechanisms, you might be tracked and then fined for breaking the law.

The fine can be anywhere from a small sum to even as much as $12,000 which was the sum paid by a citizen who broke the height limit law flying their recreational drone.

What Are the Laws Regarding Flying High Altitude Drones?

According to the FAA, the laws and regulations of high-altitude drones which must be followed completely in all circumstances are given below.

All these laws, rules, and regulations need to be completely addressed for you to fly your drone properly without any legal problems.

The FAA encourages license registration so that recreational drone flight can be done without restrictions.

What Are the Penalties for Flying Your Drone Above 400 Feet?

There are many penalties that you might face if you break the altitude limit while flying your commercial or recreation drone. According to the FAA, drones are classified as unmanned aircraft systems or UAS.

If you fly your drones above 400 feet limit, here are some problems and penalties you might face in retaliation.

If you fly your drone above the given altitude limit, you’re going to end up being fined a certain amount depending upon how problematic or risky your flight was.

In an instance of a general violation, the monetary fine might be from $100 to $200. Whereas if your drone flight ends up creating a problem for manned aircraft in the area, you’re going to face severe fines going as high as more than a thousand dollars.

There are some rare records of such fines being imposed on irresponsible drone pilots.

In case of any violation that takes place regarding the rules and regulations of drone flight, there are possibilities of criminal convictions well because of the illegal drone flight activity.

Removal of Pilot’s License or Authorization:

The FAA is authorized to remove or suspend any kind of pilot’s license or authorization in case of people flying drones above the altitude height of 400 feet in controlled spaces recklessly or suspiciously.

They can also cancel the application for a pilot’s license for as long as a year so that drone pilots can’t risk any manned aircraft in controlled airspace due to their reckless and suspicious piloting.

10 Ways to Fly Your Drone Safely and Legally

Can You Fly a Drone Above 400 Feet Legally?

Well, this question has been asked by a lot of drone piloting enthusiasts all over the world. If we simply answer it, yes, you can fly a drone above 400 feet legally. But that is something that actually depends upon a few factors.

Let’s take a look at when you can actually fly over 400 feet legally.

Understand and Learn How to Fly a Drone

If You Are Above a particular structure’s uppermost limit:

This is a vital thing to know for drone pilots looking to get HD shots of buildings and areas from a height larger than 400 feet.

If you’re flying over the top of a particular building or structure, you are allowed to hover over 400 feet above the uppermost part of that structure which usually ends up being much higher than 400 feet above ground level.

If You Are Within 400 feet radius of a structure:

If you’re flying within the 400 feet radius of a building or structure, you’re allowed to fly the drone above 400 feet limit without any restrictions.

This is also due to the FAA’s understanding of commercial drones being used for cinematic and photo shoot purposes.

So, keeping in mind the 400 feet radius of a building, you can fly wherever you want as long as the building is in uncontrolled airspace where aircraft traffic is not as dense as other places.

For flying in controlled airspace, you’re going to need a license and registration to exceed the 400 feet altitude limit.

Make sure you contact the appropriate authorities that we mentioned above to get your license for unrestricted drone piloting.

However, try to keep away from manned aircraft and restricted airspace because any reckless or accidental collision can end up extremely detrimental for you and your drone piloting skill.

Should You Fly Over 400 Feet Without Registration?

There is a low chance for you to be worried about your drone being tracked and ending up in a collision with a manned aircraft.

Although you might be able to get away without any registration or license, you should still strongly stay under the 400 feet limit if you’re not registered.

This is because there are many problems that you might end up actually facing due to certain complications and regulation issues.

Flying recreational and commercial drones should be fun and exciting not reckless and illegal, so try not to bypass legal rules of drone piloting for the fun of it.

If you’ve registered yourself and passed the Part 107 license test, you must be looking for a high-quality, high-altitude drone that can be flown over 400 feet with ease.

So, that’s why we’ve created a list of high-altitude drones based on the same great features that we think recreation and commercial drones should have in them.

It is completely justifiable to impose a 400 feet flight limit on recreational drones because no matter how rare the chances might be, there’s still a possibility of drones creating problems for manned aircraft in controlled airspace.

As there are ways of overcoming these obstacles through legal authorization and license registration, so you can ultimately fly over 400 feet if you’re looking for great fun, and exciting drone flying adventure.

If you choose one of our suggested high altitude drones, you’re going to have an amazing time flying your drone expertly.

Why DJI Mini Cannot Fly Higher Than 15 Meters in India? 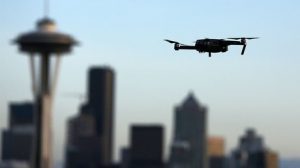 Article Name
Why Are Drones Limited to 400 feet?
Description
Here we talk about the reasons why drones are limited to 400 feet in the United States of America
Author
Nick Cast
Publisher Name
Remoteflyer Private Limited.
Publisher Logo