Lately, owning a drone has become quite common. It’s a hobby for most and a vital part of some professions.

However, not many are aware of the laws that govern drones, and chances are, if you own one, you may wonder how low the law permits you to fly it. Let’s find out.

So, just how low are drones allowed to fly?

Drones can fly in the lowest altitudes that the specific drone can. The law allows them to fly in “uncontrolled” airspace areas. That is, at any altitude from below 400ft AGL.A few millimeters from the ground. This is as long as your drone permits you. Most recreational drones can fly on the ground effect. In other words, the rotor wash hits the surface and bounces back, pushing the drone higher

However, you’re not permitted to fly it over crowds, airport territories, or areas with protected nature.

Please read on, as I’ll discuss in-depth restrictions by the US, FAA, and the UK, CAA.

How Low Are Drones Allowed To Fly?

When it comes to drones, some pilots consider a certain level of airspace to be unregulated. Well, it’s important to note that the FAA rules apply to the whole National Airspace System. And, in reality, there isn’t such a thing as “unregulated” airspace.

The FAA has what we refer to as controlled and uncontrolled airspace. Drone pilots should know the differences between the two, and how low the law allows them to fly.

Other airspace is said to be uncontrolled, meaning it falls under the category where air traffic regulators aren’t controlling traffic within limits.

Generally, drones are allowed to fly in uncontrolled space below 400feet above the surface. However, commercial drones pilots can get permission to fly their drones in controlled airspace from the FAA.

CFR Part 107 rules  “Running limits of small unmanned aircraft.”It states that the height of a tiny unmanned aircraft shouldn’t exceed 400ft above the surface, except when it’s flown within a 400ft radius of a structure and doesn’t go beyond 400ft of the” structure” nearest uppermost limit.

Importantly, when we get into details of CFR rule part 107, section 107.51, the section further entails limitations on speed, altitude, and visibility.

Additionally, the rule offers an exception if flying above 400ft in the territory of a large structure. However, there’s ambiguity, as there’s no definition of what it specifically seems as “structure” or even where the 400 feet should be referred from in such a case.

Can My Neighbor Fly a Drone Over My Garden?

In the US, this depends on the state you reside in. However, like common law, it’s not illegal to fly over a drone on private property as long as other flight laws are adhered to.

A neighbor is not under any restrictions not to fly over a fellow neighbor’s garden or private property. As per law, property owners don’t possess airspace.

However, this is exempt to certain states that passed regulations restricting flying drones in private spaces.

For instance, private property owners in Oregon can petition drone pilots if their drones fly more than once below 400ft over their property without permission.

On the other hand, drone pilots shouldn’t use drones for surveillance in Florida, specifically if it goes against a person’s privacy.

Communities can also get restrictions on drones flying in their residential areas.

Can Someone Fly A Drone Over My House UK?

Yes, if it’s a recreational drone there are no law restrictions. Civil Aviation Authority regulates that consumer drones (the class that weighs under 25kgs) should be flown no higher than 120 meters (400ft).

Although the new laws allow sub 25kgs drowns to fly near isolated property, the drone pilot should observe privacy rules and seek the permission of the property or landowner before flying.

Furthermore, they should always remember to seek formal approval and requirements to allow any drone weighing 250g and above within a built-up area.

Other drone laws are close to US laws, particularly states that don’t allow flying a drone that is capable of collecting data or undertaking surveillance (drones with cameras).

Moreover, a drone pilot should fly over or within 150mtr of congested areas. This is defined as any area within a city, town, or settlement used for industrial, residential, recreation, or commercial purposes.

The law also specifies that drones should maintain over or within 150mtrs of an open assembly of more than 1000 persons.

One particular thing to note is that more rules that are restrictive apply to drones capable of using cameras. It doesn’t matter if there is any camera footage recording or not.

In a suburban or urban setting, this will most likely cause trouble for anyone flying a drone, something most people aren’t aware of.

Most importantly, note that these rules apply to recreational drones only. Commercial drones need to seek permission from the Civil Aviation Authority(CAA) to fly. And particularly professional photographers using drones to take aerial photos need to be extra careful.

Yes, according to both the US and UK drone rules, it’s safe to fly a drone 400ft below the surface. The laws permit flying drones within the controlled areas, which is anywhere below 400ft AGL.

This is in a bid to avoid collisions with aircraft. Additionally, in April 2016, the FAA regulated that US government drones shouldn’t fly higher than 400ft for security reasons.

If you fail to follow the stated rules and regulations, there are several penalties that the FAA might put in place. These include monetary fines, criminal convictions, and revocation of flying authorization.

What’s the closing line, therefore? How low are drones allowed to fly? Our responsibility as drone pilots is to ensure we don’t fly in restricted areas and spaces.

From 2017 in the US alone, there have been over 380 drone accidents, including human injuries.

Let’s keep in mind that the rules set by both the FAA and CAA are for the best of everyone. Ensure you put an effort to learn the laws and follow them to the letter.

What Is The Lowest Height You Can Fly a Drone?

A few millimeters from the ground. This is as long as your drone permits you. Most recreational drones can fly on the ground effect. In other words, the rotor wash hits the surface and bounces back, pushing the drone higher

They mainly flow indoors and work well free from the wind and other outdoor interactions. Certain kinds of small drones can fly around a person if there’s approximately a 1-2 ft distance between the drone and the person.

What Is the Safest Height To Fly a Drone?

The safest height to fly your drone is within uncontrolled airspace. Starting from 400ft above the ground and below.

Nonetheless, this only applies as long as you are following all other stipulated regulations, including but not limited to respecting other people’s privacy.

Can My Neighbor Fly a Drone Over My House?

Depending on the state you reside in, he has the right to. Some states don’t allow drones over private houses in the US, but generally, most states do.

The FAA states that although you might own the property, you don’t own the airspace. On the other hand, if the drone is surveilling or taking photos without permission, you have the right to bring forth a civil suit on the drone operator. 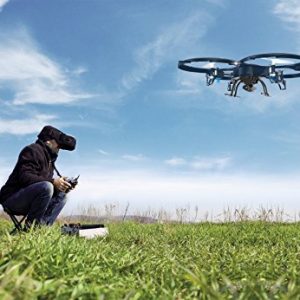 Article Name
How Low Are Drones Allowed to Fly?
Description
In this blog, we discuss the topic of how low can a drone fly?
Author
Peter Karanja
Publisher Name
Remoteflyer Private Limited
Publisher Logo