While drones have become quite useful in many industries, they pose a danger to people and property around where they are being used. As a result, the FAA decided to introduce the Remote ID to regulate drone traffic.

Remote ID is a proposed system where the FAA will require dries to broadcast their location, velocity, and other details. This will help them identify the drones and their owners. Currently, drones that appear to have Remote ID are DJI drones detectable by DJI’s Aerospace. These include the Phantom Series drones, the Matrice Series, the Mavic Air drones, and the DJI Inspire drones.

Please keep reading to learn more about Remote ID and what to expect from it.

What Is Remote ID?

Remote ID (identification) is the FAA’s way of identifying drones flying within a particular airspace. Think of it like a car’s license plate.

Suppose a vehicle is involved in theft or an accident. In that case, the first thing investigators look for is the license plate, which gives information about the owner and their address, making it easier for the authorities to track them down.

But that isn’t possible with drones since, if they are used to spying or any other illegal acts, it’s almost impossible to find out whose drone it is. And that’s where the Remote ID comes in.

The FAA requires all drones to transmit identification details such as the drone’s serial number, the take-off location, and the drone’s altitude through radio signals.

But you may be wondering if my drone transmits my serial number, won’t someone else intercept and find out who I am?

Well, that’s not the case. Your serial number is associated with the details you filled in when registering your drone. So, your details are with the FAA, and only authorized people can access them in case of an investigation. But anyone else with a receiver won’t be able to find out who you are.

When Will the Remote ID Be Rolled Out?

According to the FAA, manufacturers should start producing drones compatible with Remote ID by September 16, 2022.

And drone pilots must fly drones compatible with the Remote ID by September 16, 2023. If you are using an older drone model, you may need to add a module that will work as a remote ID or buy a new drone that already has Remote ID capabilities.

How Will It Work?

There are rumors that the Remote ID might work like DJI’s Aeroscope system, but nothing’s known for sure. If you were not aware, most DJI drones allow you to fill in your data in the app, data that can be picked up by the Aeroscope, a drone detection and counter system built by DJI.

Below are the 5 ways I know drones will adhere to the Remote ID regulation based on the FAA’s Notice of Proposed Rule Making (NPRM).

This is the primary way that drones can comply. They transmit relevant data such as emergency status, control station location, altitude, etc. that will help security agencies identify the owners.

As mentioned earlier, this data is transmitted through radio signals, and anyone with a receiver within the range can receive this data.

If your drone is not compatible with Remote ID by the deadline, you can opt for the add-on module. This module will transmit the drone’s speed, take-off location, and serial number, which is already associated with the drone’s serial number.

However, drones using this module will need to only fly within the line of sight. Since drone manufacturers are very responsive to technological upgrades, I would expect that the add-on method will not last that long.

Otherwise, they’ll lose business since the modules limit how you can use the drones.

This is another convenient option for drones that can’t use the Standard Remote ID. Instead, the drones must fly within the visual line of sight, fly within 400 feet altitude, and transmit their data through the internet. But there’s a loophole.

If you’re in an area with no network or cellular coverage, then you’ll not need to transmit any data. As such, your drone doesn’t have to be compatible, and you don’t need to attach a module when flying in areas that lack an internet connection.

If getting the Remote ID is not an option, or you’re not willing to get it, FAA created a loophole known as the FRIAs. These are areas designated for people to fly their drones without needing a Remote ID.

However, only the FAA can establish these areas, and they’ll either be schools or organization fields.

Again, you can’t use your drone much in these areas since you must fly beyond the line of sight, and you can’t fly anywhere you like. But if you want to fly a drone for fun, they are good places to test your drone-flying skills.

According to the NRPM, the FAA also plans to design the Remote ID protocol so that drones that do not comply will not be able to take off.

They also state that drone manufacturers should integrate the RID system in the drone, make it indestructible, and design it so that no one else can alter the settings besides the pilot.

Here is a great explanatory video from Pilot Institute,

Which Drones Have Remote ID?

As mentioned earlier, we can’t say any drone has Remote ID because it’s still in the works yet, and the FAA has not released the protocols for Remote ID. However, we already have drone brands that have their form of Remote ID, mostly the DJI drones. Below are some of them;

As you can see, all of them are from DJI, and they are detectable by the Aeroscope system. Remember, the FAA may use an entirely different system, and the drones we have today may not exist by 2023.

Besides, DJI is constantly updating its drones and producing more drones. I guess they’ll either update the existing drones with a firmware update or release a new drone with the remote ID inbuilt.

And there you have it. While it’s essential to learn more about Remote ID, you shouldn’t worry about it just yet. Drone pilots have up to September 2023 to start worrying about RID, and drone manufacturers will have had at least a year to make sure their drones comply. For now, enjoy flying drones as they are.

What Is the Future of Drone Technology?

Will a Drone Weighing Less Than 250g Need remote ID?

Not really. Remote ID requires drones to broadcast data that’s registered. And drones weighing less than 250 grams don’t need to be registered unless you’ll be using them for commercial purposes.

Do FPV Drones Have Remote ID?

Currently, FPV drones aren’t compatible with Remote ID. Hopefully, by 2023 drone manufacturers will make them compatible, or you may have to use a module.

Not really. Besides your location and other information regarding the drone, your contact information is not revealed to the public. Only law enforcement officers can access this data. Besides, these are proposed regulations. We expect more updates before Remote ID is officially rolled out. 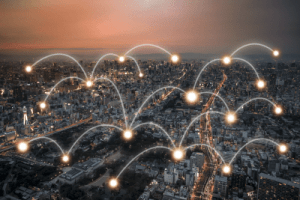