How high can a drone fly? There are usually laws against flying a drone as high as you want. Small remote-controlled vehicles at altitudes where airplanes fly are dangerous and are not legal.

There are also physical limitations that prevent drones from flying more than a few miles into the sky.

The air eventually becomes too thin for the drone to fly any higher. Propellers power drones and a propeller won’t generate enough lift in thin air.

The cold temperatures at high altitudes also prevent a drone’s batteries from working properly. A drone’s propellers will receive less power and spin slower, preventing the drone from rising any further.

Most drones cannot go above 20,000 feet, but a drone has reached 33,000 feet before. The more powerful the propellers are, the higher the drone can fly. Powerful propellers can work in somewhat thin air.

What Are the Laws?

For amateur hobbyist pilots in the European Union, the height limit might be as low as 70 meters, or about 230 feet. You need a license to legally fly a drone up to 150 meters (500 feet).

In the United States, the limit is 120 meters (400 feet). Professional drone pilots can get permission to fly drones out of their sight and at great distances. Drone laws frequently change and may become more lenient over time.

Some other laws in the United States are:

Why is it Illegal to Fly Drones Above Four or Five Hundred Feet?

More than anything else, a drone could hit a plane, and this could lead to a dangerous, possibly deadly situation. It is not easy for a plane to avoid a small drone, and you cannot trust drone pilots to avoid fast-moving planes.

Another reason is that a drone can fall out of the sky. When a drone falls from a great height and hits someone, someone might be hurt or killed.

It is dangerous and usually illegal to fly a drone over something like a concert or sporting event where the drone might fall and hurt people.

Pilots can lose control of their drones if they fly them too high. Once the drone is too far away from the pilot to maintain radio contact, it might fall out of the sky.

There is too much risk of property damage, injury, or death to allow people to fly drones very high. The federal aviation administration (FAA) regulates drones in the US.

How to Stay Within the Law?

Sometimes, you can accidentally go over 400/500 feet without intending to. In the United States, 400 feet means 400 feet above your head, not 400 feet according to your altimeter.

Be careful when flying a drone on a mountain because you might be much higher than your altimeter says you are.

Your country or state may have additional laws that are not present elsewhere in the EU or the US. Find out what the local laws are before you accidentally break them.

Finding opportunities to fly a drone thousands of meters up in the sky can be difficult. Getting a special permit that allows you to fly drones at that height might be the best idea.

How High Can Most Commercial Drones Fly?

In some places, you might have the opportunity to fly a drone as high as you want without doing anything illegal or dangerous. It can be great fun to take drone footage from far above the clouds.

Some of the more popular drones can reach the following heights:

Six thousand meters is a bit less than 20,000 feet or more than 3.7 miles. Three or four miles is high enough to get spectacular above-the-clouds footage.

You don’t have to look around for or modify a drone to make it reach 30,000 feet to capture amazing images.

How Does Flight Work for Drones?

Drones, helicopters, and winged aircraft all work because of lift. When an airplane moves through the sky, the pressure under the wing is more than the pressure above it, pushing the airplane upward.

With a helicopter or drone, there are no wings. Instead, the lift comes only from the propellers. When a propeller spins fast, the air pressure above the propeller becomes lower than the pressure underneath it. This difference in air pressure pulls the drone upward.

A helicopter or a drone can’t fly into space because the propeller would have no effect without air. The higher you are in the atmosphere, the faster the propeller has to spin to keep the drone up in the air, so any drone has a height ceiling.

Why do the Batteries Stop Working at High Altitudes?

Drones use powerful lithium-ion batteries to power their propellers. These batteries use chemical reactions to generate power, and the reactions are sensitive to temperature.

At colder temperatures, the voltage the batteries produce decreases. When you fly high enough into the cold atmosphere, even a high-capacity battery will only produce a small amount of voltage , and the drone won’t be able to fly higher.

Drones will never realistically encounter temperatures too hot for the battery to work properly. Even temperatures as high as 60 degrees Celcius won’t prevent a drone’s battery from working.

What to Look for in High-Altitude Drones?

A high-altitude drone needs to be light and powerful. The more lift the drone can generate relative to its weight, the higher it can go.

The radio signal also has to be powerful, as otherwise, it will move out of range before it reaches its maximum height.

Since you won’t be able to see your drone above a certain height, you need cameras. People who buy high-altitude drones usually want to take beautiful photographs and videos.

You can get a high-altitude drone with a 4K camera that can point in any direction with enough money. Drones that can reach great heights are often expensive, sometimes costing thousands rather than hundreds of dollars.

A high-altitude drone must also be able to work well in the wind. The wind may be strong up in the sky even if it is calm near the ground. The higher you go, the more hostile the environment becomes.

Some drones are much stabler in the wind than others. Many of them can automatically compensate for the wind and hover in the same spot despite it. Any good high altitude drone needs to be stable.

Can You Modify a Drone to Fly Higher?

To reach an impressive height, you might need to modify a drone. Right now, the unofficial drone height record might be 33,000 feet. There might not be any commercially available drone that could top that without modification.

You might also need a more powerful battery. A small battery might not be able to make it a few miles up in the sky and then back down again.

An unnecessarily large battery, on the other hand, adds weight. Anything that can make your drone lighter will help it fly higher.

You should remove any features you don’t use to lighten the drone. Each change you make will help you fly a little higher.

You might also need to choose your own motors and propellers. With enough time, you could learn a lot about drones to put together a custom high-altitude drone.

What a Drone Needs to Fly Very High?

To be able to fly miles into the sky, a drone needs at least the following:

The farther you move above the earth, the harder it gets to keep traveling upward. Conditions high up in the sky are much harsher than those near the ground, making flying more difficult.

The thin air, the cold temperature, and the strong wind eventually defeat any drone.

However, some drones can fly much higher than others. A light drone with powerful engines can fly in somewhat thin air, and many drones can handle fairly strong wind. People have reached very impressive heights with drones.

Usually, flying a drone very high is not legal. However, if you have the opportunity to experiment with high-altitude drone flight, some models work better than others.

Usually, more expensive models can fly miles into the sky. If you try to find a cheap high-altitude drone, it won’t perform as well.

If you are aiming for truly impressive heights, you may have to modify a drone and choose the right motor, propeller, and battery. The best way to fly above 20,000 feet is with a modified drone.

Why DJI Mini Cannot Fly Higher Than 15 Meter in India? 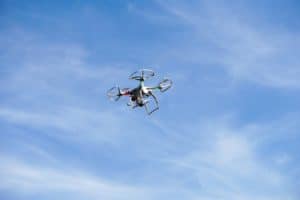 Article Name
How High Can a Drone Fly?
Description
Drones ca fly really high, but again it depends on a drone. In this article, we try to answer the question of how high can a drone fly?
Author
Nick Cast
Publisher Name
Remoteflyer Private Limited
Publisher Logo