One of the most important factors to consider when buying a drone is how long it can stay airborne. Knowing this will help you schedule your activities appropriately and even have contingencies in case one battery malfunctions.

Even though most consumer drones don’t last long, some may last longer than others.

So, how long will an average consumer drone stay airborne?

Most consumer drones last between 15 to 30 minutes. Most entry-level drones can last between 5 minutes and 10 minutes. If you want to fly your drone for a long time, it’s advisable to purchase extra batteries.

Now let’s discuss what influences how long a drone can last airborne and some practical ways to extend the battery life.

What Are the Factors Affecting Drone Flight Time?

Batteries power all consumer drones. So you need to check the size of the battery, type, and battery life.

The larger/stronger the battery, the longer the flight time. And by larger, I don’t mean in size, since this will only add more weight to the drone.

The battery should save more energy per unit mass. That is, it should be relatively small while having a larger battery capacity.

LI-on (Lithium batteries) are the best and most commonly used. This is because lithium metal is light, and it stores more energy than most batteries.

If the drone’s batteries aren’t durable, you can purchase after-market batteries as long as they are compatible with your drone.

The rate at which the drone consumes also affects how long the batteries last. As mentioned earlier, make sure you have several batteries to make sure you fly for a more extended period.

How to Extend Drone Battery Life?

When the battery is new, you’ll get a maximum lifetime. But this deteriorates over time. It gets to a point where you have a fully charged battery, but it only lasts half of the usual flight time.

Below are some of the ways to extend your battery’s lifetime.

Heavy drones consume more energy, and they wouldn’t last very long airborne unless you have very powerful batteries. That’s why most propeller drones are light.

You can always increase your drones’ flight time by making it lightweight, i.e., removing some of its parts, like you would in a sports car. For example, you can remove the lenses, propellers, and other components that aren’t very necessary.

When talking about weight, you should also consider the weight of the payload. You may need to add cameras, gimbals, RTKs, and other accessories for professional drones, which may reduce the flight time.

It is advisable to fly a drone when it’s sunny and less windy. Flying in windy climates can drain your battery much faster. If you want to save some battery power in such weather, try to fly in the wind’s direction.

Most drones are not waterproof, so it would help if you didn’t fly in rainy conditions. As they say, water and electronics do not get well together.

Some drones like DJI SPARK can handle rain, though the freezing climate is also a no-go for flying since the moisture can damage the internal parts.

Most drones come with mode of aggressive flying. I suggest you should try to fly your drone conservatory especially if your beginner.

Avoid flips and flying very fast. This will help to save your battery power and protect your drone from crash.

The type and power of the propellers and motors also determine how low the drone lasts.

Powerful motors make the drone fly faster, but they consume a lot of energy. That’s why racing drones will fly up to 120 miles per hour, but they will only last 5 minutes airborne.

Propellers for energy-efficient drones often have a wide surface area and a wide angle of coverage.

The good thing is that you can change the size of the propellers in most drones. So test with various sizes to find out which works best for your drone.

The flight time of the drone varies on different types of models. A normal consumer drone can fly up to 30 mts.

They are the most popular drones available in the market. Entry level drones can go up to 5-10 minutes.

Of Course, it also depends on the brand too. Recording while flying a quadcopter also drains the battery faster, hence shortening the flight time.

These are also known as toy drones, and they are suitable for kids and, of course, beginners. A good long-lasting beginner drone cost about $100-$350.

They come with all the standard features, and they are usually ready-to-fly right out of the box. So you do not have to pay extra for some advanced features.

Some of them may have advanced features such as flips, orbits, tracking, but these are just modes a new user can figure out. Ryze Tello, DJI Mavic Mini, SPAINTAIN S5c Wi-Fi FPV drone are good examples of beginner drones.

These drones are good for semi-professionals and also for hobbyists. Most of them are designed for photography, and they have a camera attached, and they even have the ability to hover when you need to take better images.

Despite the extra payload, some of them still manage to have longer flight times. A reasonable mid-range drone costs between $500 and $2000. DJI Mavic Pro and DJI Phantom 4 Pro are good examples of mid-range drones.

These are the most preferred drones for professionals. They have most of the features you’ll find in midge drones.

Some of them are designed for specific tasks. For instance, the DJI Inspire 2 is great for Hollywood quality videos thanks to the 5.2K video quality, 27 minutes of flight time, and Zenmuse cameras and sensors.

The DJI Matrice 300 RTK is another high-end professional drone designed for carrying out remote sensing and surveying tasks. It also has a 55 minutes flight time.

What Are the Power Source of Military Drones And Effect On Their Own Flight Time?

A very important factor. The stronger the power source the longer the drones stay in the air.

There has been a lot of research about the source of power for drones to extend their flight time.

Keep in mind these sources are still being tested and not available in the consumer market.

Military drones, and some custom-built drones, have some of the most extended flight times. Some of them are known to fly up to 24 hours continuously.

They use different sources of power. However, these power sources are still under extensive research, and they’re not available to the public yet. Below are some of them.

Studies show that drones can fly longer on diesel. Vanilla Aircraft’s VA001, the diesel-powered drone, has broken the world record for the longest flight in history, which lasted for five days. And it still had enough power to fly for three more days.

Solar-powered drones can last for a year as long as there’s solar power. They were developed as a student project under the Innovation and Design at the NUS Faculty of Engineering.

They are often lightweight drones that can also use batteries when there is no sunlight.

Yeair! is one of the most popular combustion engine drones, and it was released in 2015. It flies for up to 60 minutes continuously, and it can carry up to 11 pounds of payload.

It can also achieve a top speed of 100 kilometers per hour, making it ideal for delivering packages. Considering how fast people funded it on Kickstarter, many people are eager to own drones with longer flight times.

Plugged In The Ground:

This is where drones are plugged into a power source on the ground through long power cables.

DroneCatcher uses a similar model where drones are continuously connected and are only released when they need to track down a stray drone.

The benefits of this power source are numerous as you can fly indefinitely and be able to transmit data without being interrupted.

What Are the Best Drones for Longer Flight Time?

Below are some consumer drones to consider when you’re looking for a longer flight time.

This DJI drone has a 44.7 MPH top speed, a 31 minutes flight time, and a 5 miles operating range. I may not recommend it for beginners because of the high price tag and the top speed.

The 12 MP camera and1080p display are good enough for professional and DIY filming and photography.

It also has intelligent flight modes such as cinematic modes, ActiveTrack, Waypoint GPS Navigation, and the ability to detect collisions.

Batteries are quite expensive, but you can rest assured that they’ll last longer than those in cheaper models.

The DJI Mavic Mini 2 is more beginner-friendly both in price and ease of use. It has a 31 minute flight time, and it’s light, so the propellers and motors don’t need a lot of energy to lift it and keep it airborne.

You can also opt to use or not use propeller guards to keep the weight low. Some users had an issue with that this drone has no 4K video (it has 2.7K), but DJI solved this with the latest Mavic Mini 2.

This new upgrade has a 4K video resolution, intelligent flight modes, and a 30 minutes flight time. The Mini 2 also has OcuSync transmission for long-range communication and Zoom capabilities.

The Blade Chroma is a favorite among people looking for an extended flight time. Featuring a 6300mAh battery, it lasts at least 30 minutes airborne. It’s great for beginners and professionals since you can fly it right out of the box.

It also has a 4K resolution (60fps), 1080p display, perfect for high-quality filming and photography activities. It also has a couple of intelligent flight modes and a GPS-enabled return-home mode.

This is the perfect budget and beginner-friendly drone with a long flight time. It costs less than $200 and has a 19 minutes flight time, which is commendable considering most beginner drones manage up to 10 minutes.

Despite being relatively cheap, it also has advanced features such as a follow-me mode, GPS, return-to-home, and altitude hold.

The 1080p camera is also great, but the Wi-Fi connection may experience some delays if you fly too far from the controller.

HUBSAN: The Industry Leader in Easy to Fly Drones

This one is for professionals looking for a more powerful drone that lasts longer airborne. It’s slightly larger, heavier (12 pounds), and with a unique 6 -rotor system.

But still, it manages a 25-minute flight time, and the manufacturer even provides two lithium polymer batteries in the package. It’s also made of carbon-fiber, which ensures it’s durable but not too heavy.

It also has a 4K video resolution, a 7-inch screen, and a 12 MP sensor, all suitable for professional filming and photography. Like most high-end drones, it also has Geofencing, Return-to-home, orbit, and several other flight modes.

Below are other drones to consider;

With the addition of a few extra sets of batteries some quality flying time can be achieved by a beginner to the sport.

I hope that in the future, they will roll out drones with longer flight times to consumers. This will allow you to fly for hours without worrying about switching batteries.

That would be fun, right? But for now, we have to deal with what’s available. Always go for drones with a longer flight time, purchase extra batteries, and take care of the batteries with the tips I just provided. 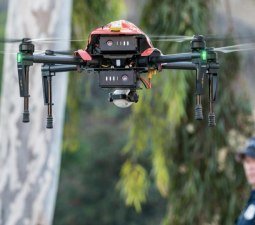 1 thought on “How Long Can a Drone Stay Airborne?”