As much as the recent innovations of drones have been a remarkable turnaround in people’s lives, it has come with disruptions across the globe.

Terrorists are using them in criminal activities like ferrying chemical, biological, and explosive products to their targeted areas, thus causing interference in security.

Detecting, locating, identifying, and eliminating the threat caused by drones has been a great challenge.

Nevertheless, security agencies and defense forces are not throwing in the towel yet. They are constantly searching for anti-drone technological solutions to deal with this challenge. They are aiming at a technology that will effectively, comprehensively, and innovatively counter any security threats cause by drones.

Additionally, many companies are coming up with the anti-drone control systems for defense and surveillance.

In this article, I will discuss various anti-drone solutions designed to counter drone-driven criminal activities. Defense units around the world are adopting the solutions, and they are proving their effectiveness. Keep on reading to understand more.

In this technology, the anti-drone systems help detect, track, and hinder communications between the aerial aircraft and its operator.

The systems cover several miles and can give detection of up to 360- degrees thanks to the four radars installed in it. Here are some of the technologies that companies have innovated.

In the military and defense sectors, laser based-guns are the most used anti-drone systems.

The security agencies also use mobile platforms, which are placed on buildings, vehicles, or tanks.

If the scenario is a real threat, the laser guns are released to shoot the drone down.

Recently, these laser guns have been upgraded with Athena, a new system that boasts a 30KW of demonstration power.

The upgraded laser is fast, accurate, and doesn’t cost much to shoot. With this kind of anti-drone system, it is easier for security agencies to deal with threats to terrorist attacks.

This is a multi-sensor system that security organizations use to detect, identify and neutralize drones. The system is broad and comprises RF and Acoustic sensors, radar combinations, and videos cameras.

You can detect even the smallest device from a distance of up to 2000 meters with a cltr+sky. In addition, there is a mobile version of this system that security agencies are attaching to their vehicles.

Considering the threat that drones pose to world security, detection is inevitable if security stakeholders are to counter it.

This has led to the innovation of detective systems for drones which are built with different technologies.

Here are some of the devices being used to detect the activities of drones in various areas. The systems can be used on their own or combined depending on several factors.

These are devices used to help discover and detect any mobile target in and out of a protected zone. This is to say that it monitors everyone and everything within the zone.

It is the best unit that security agencies can use to identify anyone operating a drone within the area and establish if there is any security threat.

RF detectors are software used in capturing and analyzing signal transmissions. They feature an analyzer that can scan up to 20GHz within 20 seconds, making it the fastest system in detecting drone operators.

Security agencies can use this system to detect illegal operations taking place in a wide range. Its data storage is unique since it can record and store for up to seven hours consistently.

This allows you to conduct a thorough investigation and ensure that security is intact. SkyFence and DJI’s Aeroscope are built using this concept.

These are drone disabling tools, and they work by blocking the drone’s control signals. They are the best in neutralizing explosives.

Once a jammer is launched, they hinder the drone from operating by forcing it to land. The unit then cancels any video or photo transfer that the drone was feeding the operator with.

The jammer makes the operator lose their control over the drone, thus hindering any activities that jeopardize an area’s security. Jammers can neutralize drones from a distance of up to 20 kilometers.

Drones that find their way into restricted zones boast an intelligent mass data analysis. Tracking them is a challenge, but not with the video wall system.

The video wall system is a big display that shows loads of information capacity. It captures the drone on a map of 3D terrain and displays data from CCTV cameras, security vans, and security personnel.

All this information is shown simultaneously, and therefore it is fast and efficient.

This is a manual neutralization technology where, once a drone has been identified, one can launch a net either from the ground or from the air using another drone.

It can help supplement RF and all other detection and neutralization technologies. Below is how all of these systems can be used together.

Also, RF detection is not costly and identifies multiple drones making it the most ideal for the security agencies. However, it is ineffective in crowded areas due to its short range.

The military is mandated to ensure that there is tight security in the land, water, and air. They should not leave anything to chances because drone operators are skilled and can monitor even a pipeline under the water.

Here are various areas that the anti-drone systems are being applied to enhance security by security agencies.

Many activities take place in maritime and therefore the water security can’t be undermined. There is a need to protect the ports and harbors because those are the target points for terrorists.

Also, ports have got many containers being shipped in and out. Criminals can use drones to monitor the content of these containers.

Moreover, they can send explosives to destroy their target and cause people to count millions of losses and may be loss of lives.

However, with detective anti-drone systems, their activities can be stopped, thus enhancing security. These unit systems are used to screen the containers and monitor all the activities around the ports.

There is a growing need for security solutions by governments, businesses, and infrastructure in the world.

Security agencies can achieve this by using anti-drone security solutions in various places, including airports, big hotels, malls, and schools, which are some main targets of terrorists.

However, their activities can be countered through surveillance and detective technologies. The use of jammers, video wall systems, and other anti-drone systems will help abort drone operators’ missions.

Airports remain the main targets of terrorists, and enhancing security therein is an unquestionable requirement. With the drone jamming system, this is achievable.

They have alarms that security agencies and security personnel can install in various parts of the airport to detect any drone operations. This can prevent many disruptions and save lives and properties.

Anti-drone technology has come at a time when it is most needed. Drones are no longer the unmanned toys that would excite everyone.

There are many criminal incidences where drones have been used, and that’s why this technology is essential, especially for the security agencies. It will help safeguard the security of airports, ports, and harbors, and also the land.

The anti-drone systems are effective and will detect and neutralize the drones before interrupting security in various areas. This article has discussed how the anti-drone technology will help security agencies enhance security effectively. 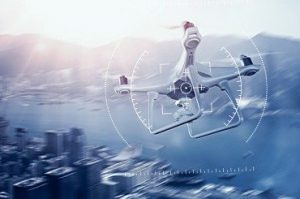